Hi, it’s Shola here from Speak Up Like a D.I.V.A. I want to ask you: do you try and add some humour to your presentations and your speeches? Or does it seem like a huge mountain to have to climb to try and be funny and it’s something you want to steer well clear of?

That is what I’ve got to talk about in this week’s vlog. Before that, let me just say a big hello to you. My name is Shola Kaye, I’m based in the UK and I work with individuals and corporates to help them with their communication. I also work with small business owners to help them grow their business with public speaking.

Today let’s have a chat about being funny. The reason why I want to talk about this is firstly, I had to write a speech for a friend’s birthday party a couple of months ago. People were flying out to Spain for my friend, it was a big birthday, he had about 70 people coming out and he wanted me to write a speech about our friendship. I thought well I’d love for it to have a few jokes in it so I set about doing some training in how to be more humorous in speeches.

Just to share before I go on, I love the work of somebody called Craig Valentine in the States. He’s got some wonderful resources on how to be funnier. Then in the UK my favourite is David Jones PhD. He teaches stand-up comedy and he also teaches how to be a funnier presenter. Anyway, there were two occasions recently I needed to try and be funnier. The one occasion was my friend’s birthday but then somebody contacted me, a friend of mine yesterday, and said “Oh Shola, is it necessary to be funny when I’m doing public speaking? Because my husband says that I’m not funny enough and I need to add more jokes but I want to just focus on the content of the presentation and just get on with it” and I said “oh, that’s completely fine”.

To my mind, when I think other people, other speakers, agree with this too. The speakers who have to work hardest are comedians because they have to get laughs. If you’re comedian and you don’t get any laughs then you’re not really a comedian, are you? If you’re a speaker and you’re trying to go for a bit of humour and people go “fantastic!” it’s great. But if they don’t, you can just carry on and pretend it wasn’t even a joke. I think comedians work really hard just to get one good joke or two good jokes. They may have practiced many many times in front of many different audiences before that particular joke is allowed to be a part of the routine, the regular routine.

As I say, luckily for us as speakers we don’t have to work quite as hard. I want to share over the course of two videos a couple of simple tips that you can use to be a bit funnier. My sort of public speaking idol Craig Valentine says it’s not about adding comedy, he says it’s about uncovering the humour in your presentation. I think it’s nice way to look at things. Then it takes the pressure off us and we can analyse the content we already have and see where we can uncover a few laughs as opposed to having to put them in specifically.

Public Speaking – start with your own funny stories

The easiest way, I think, to get some laughs is to poke fun at yours truly, at yourself. The reason why I think that’s a good place to start is, first of all, it doesn’t offend anybody so you know you’re not putting any backs up during your presentation. Also, you know yourself better than anybody so it’s very easy for you to find a few bits that people can enjoy and can laugh at alongside you. What that does is by having some humour poking tools yourself it tells people that you don’t take yourself too seriously and I think that’s really important. You want your audience to relax and enjoy and just sit back and let you take them on a journey. If you don’t take yourself too seriously, because even in a serious presentation you can have a little bit of humour just to lighten the energy, if you don’t take yourself too seriously I think it tends to have pick make people like you and trust you faster.

I think there’s a great argument to be to be said for including humour in your presentations when you can. One joke that I have used a few times in my presentations is (I won’t even share it as a joke) I compare myself in looks to Duchess Meghan of Sussex, so Prince Harry’s wife. I’ve done that a couple of times now in speeches and it really does get a good laugh because it’s so ludicrous, I don’t look anything like Meghan! And the only thing that we had in common is she’s mixed-race and I’m black. By saying things like “oh, you know, being a ravishing beauty like Meghan of Sussex… can’t you see the resemblance?” people instantly think: she doesn’t take herself seriously. They have a few laughs, I have a laugh with them, and then we carry on with the presentation.

Public Speaking – fit the jokes in at the right times

Now, of course, if you’re adding humour like that it’s gonna have its rightful place you don’t just chuck a joke in and completely out of context. Whenever I do add that there’s some comment beforehand about appearance, about looking in mirrors or something that fits in the presentation. Then I can throw this thing in “well looking in the mirror and recognizing myself as being one of the great beauties of the world like Meghan Duchess of Sussex, can’t you see the resemblance?” and people just crack up because obviously there is none.

If you can find some little way to laugh at yourself, especially near the beginning of your speech, then it instantly puts people at ease and you can get on with the rest of your presentation. The rest of it doesn’t even need to be funny but if you can add a couple of jokes near the beginning then I think it’s a really great place to have them because you’re getting people on side. It’s almost like you’re your earning favours with them because you’re giving them some laughs and they’re like “oh okay, yeah this looks like it could be good, let me sit back and enjoy”.

Public Speaking – avoid poking at others, keep the spotlight on yourself

Typically, if you are gonna make fun of somebody in the group, let’s say I was at my friend’s party and I was gonna make some fun of somebody in the group, then you might pay them the courtesy of telling them beforehand and just getting their permission so that you don’t embarrass them. Ideally, you wouldn’t be doing that in the first place because you should probably have enough comedy content with yourself. Start there, poke fun at yourself, start collecting stories or funny things about you that you can insert in the right place in your speeches and you’ll be good to go.

Take care and be funny, bye.

1 – Get my free guide – 27 places to find speaking opportunities.

Find out where your next speaking opportunity might come from – whether you’re a beginner, intermediate or experienced speaker.

Join us for tips, discussions and community!

3 – Are you an ambitious coach, consultant or small business owner? If you’d like to wow your audiences and find more speaking opportunities, then watch the FREE on-demand training video here: https://sholakaye.com/masterclass

4 – Find out about my VIP Days and private coaching. Book me for a VIP half or full-day session if you want to make some serious progress! 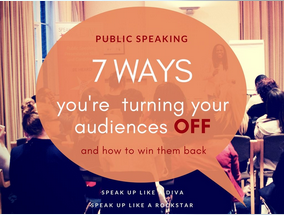